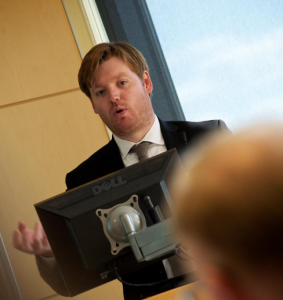 I am currently an Assistant Professor of Practice in Political Science at NYU-Shanghai. Previous to this position, I was a Visiting Assistant Professor in the Government Department at Hamilton College and a Post-Doctoral Research Fellow at the Belfer Center for Science and International Affairs, Harvard Kennedy School. Academically, I focus on international relations and comparative politics with an interdisciplinary background in international organizations, conflict/security studies, and Pacific Asia. I received my PhD (August 2015) from Tufts University’s Fletcher School of Law and Diplomacy. I completed undergraduate studies at Princeton University’s Woodrow Wilson School and received my Masters of Arts in Law and Diplomacy from the Fletcher School.

Originally from rural Kentucky, I have lived and worked abroad for sustained periods of time in France, China, India, and Turkey. For my dissertation field research, I spent nine months in Beijing on a Boren Fellowship through the National Security Education Program. I have also coordinated an international civic engagement program based in Zhuhai, China (PRC) sponsored by the Gates Foundation and Duke University. In 2015, I was a Summer Associate at the RAND Corporation researching Chinese views on Southeast Asia and the Developing World. I have additional policy experience from serving as a Rosenthal Fellow for the US Department of State in the Bureau of Democracy, Human Rights, and Labor.

My academic work includes a range of interests with writings on Chinese international treaty behavior (Asian Journal of Public Affairs), how nationalism impacts Sino-Taiwanese negotiations (Chinese Yearbook of International Law and Affairs), the changing politics of UN Peacekeeping, the proliferation of military technology and China’s drone program, Sino-ASEAN relations, and public diplomacy. I have presented this research at conferences associated with, among other organizations, the American Political Science Association, Harvard University’s Kennedy School (Belfer Center), the International Studies Association, Association for Asian Studies, the Fletcher School, the US Naval War College, and Columbia University’s East Asian Studies Department. I have received fellowships to support my research from a diversity of sources including Princeton’s Woodrow Wilson School, the Dean’s Discretionary Fund at Tufts University, the Tobin Project, the Fletcher School PhD Fund, the John Roche Memorial Fund, Harvard University’s Program on Negotiation, and the US National Security Education Program. Throughout that work, I have sought to bridge academia and the policy world with salient, inter-disciplinary analysis of international affairs.